In 2012 I wrote a post about the controversy  over the design of a planned memorial honoring the Commander of the Allied Forces in Europe during WWII  and 34th president, Dwight D. Eisenhowser.  Frank Gehry was to be the architect.  That post can be found here,  “Will Ike like Frank?

The Eisenhower Memorial will be dedicated today after almost ten years of planning.   It is located in Washington, D.C.  near the National Mall.   I think Ike would approve of the final design.

National Public Radio had an excellent description by Susan Stanberg with good photos.  You can read her review or read it.  The link is here at Eisenhower Memorial, NPR.

The “I like Ike” campaign button reminds us of a time when presidential campaigns were a bit tamer than the one facing us in 2020.

Will’s article exposed me to the proposed memorial to Dwight D. Eisenhower by Frank Gehry to be placed near the National Mall in Washington.  I also learned of a new biography by  Jean Edward Smith, “Eisenhower in War and Peace.”

As  it seems to be with many memorials, what Gehry proposes is not without controversy.  Remember the Vietnam Memorial and more recently the Martin Luther King Memorial?  And almost anything proposed in Washington these days is up for debate between Republicans, Democrats and undecided!

So what is the opposition?  Will writes, “…the memorial will have a colonnade of huge limestone-clad columns from which will have 80-foot  stainless-steel mesh ‘tapestries’ depicting the images of Eisenhower’s Kansas youth. And almost as an afterthought, there will be a statue of Eisenhower as a boy.”   So far so good.  I love Gehry’s building designs which seem like works of art to me.  Several years ago I attended a concert by the Los Angeles Philharmonic at Disney Concert Hall in downtown Los Angeles.  It is magnificent inside and out. 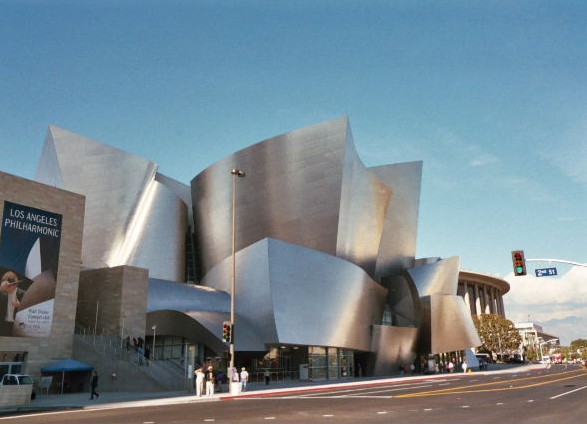 Members of the Eisenhower family seem to have many objections to the planned project including the background of the sculptor who will provide the statue of Eisenhower as a boy.  And they question the endurance of the 80-foot stainless-steel mesh walls.

If you want to see a bigger-than-life-John Wayne memorial, visit the site of his birthplace in Denison, Texas.  He was the first Texas-born president.  The north Texas town of Denison takes pride in that fact and maintains his place of birth even today as a historical site complete with a life-size statue of him in military uniform on the grounds.  Eisenhower’s father  had come from Kansas to Texas to work for the railroad,  but  he moved his family back to Kansas when the future president was only eighteen months old.

We will have to wait for the recommendation of the oversight panel to see if Gehry’s design will be an acceptable  memorial for a United States president and lives up to Gehry’s “architectural flamboyance” as George Will puts it.  However, I have seen the statue in Dennison and that is good enough for me.